Is Your Boss Abusive? Here’s Some Bad Advice For You 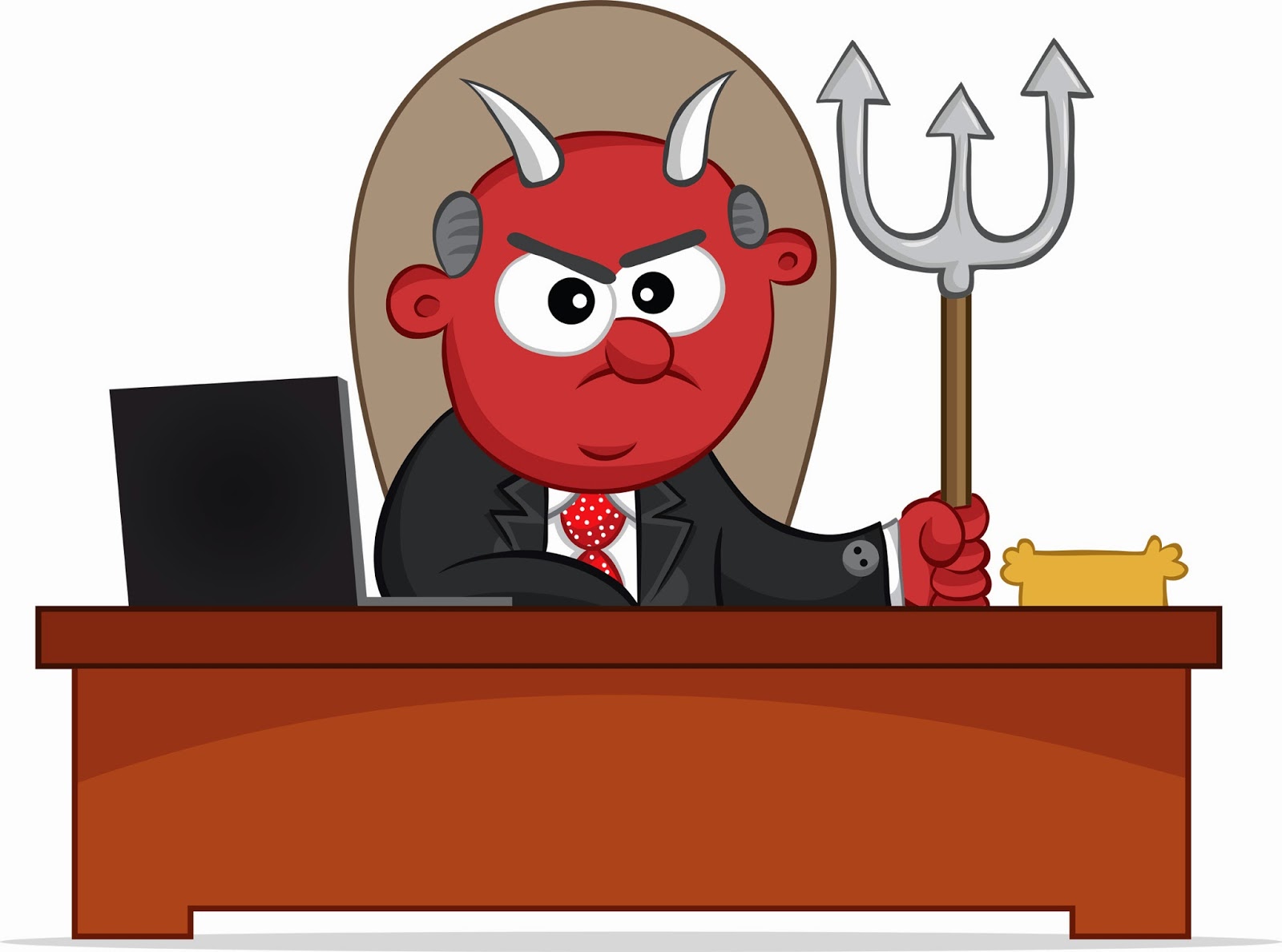 Over the years, I’ve read a lot of advice about dealing with abusive bosses. Most of it is disappointing.

Why? Well, it seems there’s no end to the number of people who’d prefer to blame the victim and defend the abuser than offer useful information or even comfort to those who’ve been abused.

And when it comes to the worst kind of abusive boss—the narcissistic bully—the advice can be particularly troubling.

“Avoid complaining about the behavior to everyone except the offender … If you lack the courage to speak directly to the boss, find another way to deal with the stress, by talking to and getting support from a partner or close friend who has no ties with the organization.”

First, if the people in your HR department have zero power or their heads up their butts (way more common than it should be), talking to a sympathetic coworker is about all the relief you’re going to get, seeing as friends and family members unfamiliar with your work environment are likely to dismiss your legitimate concerns with off-the-mark (though perhaps well-meaning) statements like:


“It’s bad everywhere.”
“Just give the boss what he wants and forget about it.”
“It’s only a job.”
“Maybe you’re being too sensitive.”
"No one can abuse you without your consent. Stop being a victim."

And I guarantee you the more screwed up your work environment, the less your friends and family will believe what you tell them. (Unless one of your friends is me, because I’ve seen it all and believe it all. You could tell me your boss has horns and some fangs, and yes, I’d ask you to bring me a picture next time, but in the meantime I'd take your word for it.)

Second, “If you lack courage?” Okaaaaayyy.

The author goes on to state:

“Much as with leaders, there are few natural born louders [the author’s term for bully leaders]. It can result from a lack of self-awareness combined with others’ unwillingness or inability to confront the louder.”

In other words, you have an abusive boss because you’re too much of a punk to call him on his crap. Wow. Evidently this person has never worked at a company with a raging, malignant narcissist. You can confront this person all day long, and it’ll be like talking to a wall, because narcissists simply don’t give a shit. Anything you have to say that flies in the face of the fake persona they've created will be promptly ignored.

And confrontation isn’t all it’s cracked up to be either.

A 2013 study conducted by the Workplace Bullying Institute found that 68.8 percent of targets confronted the bully, and in 93 percent of cases, the bullying did not stop. Keep in mind that narcissists are particularly dense about others’ concerns and thrive on both positive and negative attention. If a confrontation doesn’t make them more nasty, it might just give them a thrill.

Yes, these are some sick, twisted folks.

Which is why, when dealing with narcissistic bullies, the opposite advice can be equally unhelpful—the suggestion that you try and elicit the boss’ empathy or make him “understand” his negative effect on you.

Well, I’m sorry, but that simply won’t work with a narcissist. The narcissist has no empathy to elicit, and any show of vulnerability or need from you will merely cause him to salivate. A predator’s nature is to target and exploit weakness, period.

Your narcissist, your god
But the advice I find most offensive and appalling is the kind that implies (if not outright states) that the narcissist has some type of “superpower” to hurt and destroy.

To hear these folks tell it, narcissists are omniscient and omnipotent. They see all, know all, and are unable to be stopped, because they have an “uncanny” ability to read people, and they’re charismatic and authoritative, blah, blah, blah. If you have a narcissist boss, then, you must never contradict him, and the first chance you get you should run, run, run!!!

Well, let me just say that malignant narcissists (sometimes called “destructive narcissists”) are very bad news, that’s for sure. And, if you discover that you’re working for one, you should indeed make plans to run, run, run. But not like a scared chump. You should run because these slime balls aren’t worth your time and talent. A narcissist will never allow you to shine, and anything you learn on the job will be despite her efforts to sabotage you. So yeah, make plans to get out, but you don't have to be afraid of these bastards.

And as for the narcissist’s “uncanny” ability to hurt people … well, if you’d spent your entire life practicing how to manipulate without breaking a sweat, you’d get pretty good at it too.

Also, malignant narcissists are shameless, pathological liars, and I mean shameless. So yeah, that gives them an “advantage,” if you will, over decent folk who won’t do anything, say anything, and hurt anyone to feel and look good, but it sure as hell doesn’t make them superhuman. In fact, destructive narcissists are sub-human in my humble opinion. They are empty, dark spirited meanies.

Finally, as far as narcissists being charismatic, well, that’s true—to a point. Many found Jim Jones, Hitler, and Warren Jeffs “charismatic,” (defined by Google as “exercising a compelling charm that inspires devotion in others”).

But that’s by and large an early impression. Once you get to know narcissists a bit more, the scales will fall from our eyes, and these God-less souls will creep you out and occasionally make the hair on the back of your neck stand to attention.

So, there’s nothing to be gained by walking on eggshells around your narcissist boss, in the process giving him permission to violate all your space and emotional boundaries, hoping that by doing so he won’t lash out at you today. Narcissists are foul. They don’t need a good reason to hurt you. They just do it. Allowing him to dominate you won’t help your cause, at least not in the long run.

To repeat, narcissists aren’t gods, but they will end up bowing the knee to one, that’s for sure. Remember that.

The narcissistic “relationship”
In "Your Bullying Boss May Be Slowly Killing You," Sandy Hershcovis, a professor of business at University of Manitoba, is quoted as saying, “We don't want to blame the victim, but we recognize this more and more as a relationship [between the bully and the target].”

Uh … no. If you’ve been targeted by a nasty workplace bully, you aren’t in some damn relationship.

Is the insect trapped in a web in “relationship” with the spider? Is the mouse being tossed about in a “relationship” with the cat? Not buying it. Targets don’t get bullied because they’re doing something to provoke the bully (unless you consider reserving your right to express your own mind “provocation”). Bullies bully because they’re effing bullies.

It’s as simple as that and cruel to suggest anything else.

Bullies choose their targets for being who they are, whatever they are, and it’s ridiculous to assert that you being you is a good reason for someone to abuse you.

Sometimes I can’t help but wonder whether these so-called experts are bullies themselves.

Speaking of experts ...
And speaking of experts, no I don’t have a single credential to back up my stance. However, I’ve worked with more narcissistic bullies than I care to remember, and I’m a fan of abnormal psychology, so whenever I run into one of these people, I start my research all over again, even while I’m studying these jokers like rats in a lab. And if that’s not good enough for you, I understand. You can call me full of shit and move on. I can live with that.

But if you’ve worked or are working with a malignant narcissist, I bet you can see some truth in what I’m saying. I’m 100% sure of that.

Is there any good advice out there?
I think so.

But now listen, it’s all an uphill battle, because disturbed personalities like it like that, our organizations seem to love these folks, the bully has more power than you, and if you’re normal you probably won’t relish the idea of going toe to toe with a nut job.

That said, the advice I listed in a previous article on the topic still stands (and while I’m no expert I repeated this advice from an expert, so there), but here are a few more goodies.

You’ll notice that most of the items on this list relate to guarding your emotional health, and that’s because workplace bullying is mostly a psychological form of abuse. Guarding our minds against the mind games of the narcissistic bully is so important.

As I like to say (about the vile bully who once attached herself to me), “You’ve got an apartment in my head, I admit it. But you better sit your ass on the couch, stare at the wall, and not say shit.”

And she obeys.
Posted by Unknown at 10:11 PM No comments: