When Your Employee Lies to You 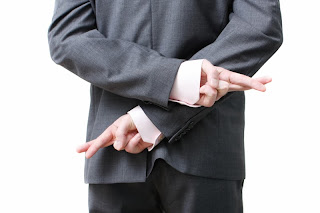 Lying is one of those odd things in life—everyone lies to everyone, but no one likes to be lied to. This gets even weirder in the workplace, because it’s bad form to call someone out as a liar, even when everyone knows damn well she is.

I stared at him, aghast. He probably thought I was shocked to learn the truth about this woman, but hell no. She practically oozed insincerity, and I’d never trusted her. However, I was horrified to learn how widespread the open secret was.

But that’s just it. No one had ever confronted this women (even her boss, apparently) because you don’t do that at work.

So, if it’s impolite to confront a liar (and see, I bet some of you are cringing right now saying to yourselves “She didn’t have to go there. Just because someone tells a lie doesn’t make him a liar…”) what are you supposed to do when your employee lies to you?

Here are some options.

Ignore It
Look, I didn’t say these would be great options, but they’re options. Depending on the specifics of the lie and the impact it has on business and your relationship with this employee, you might just ignore it.

Your employee calls in sick, and you’re pretty sure she’s hunting for a new job? Maybe you should just let that be.

Pretend The Employee Didn’t Mean to Lie
I once had an employee tell me he’d finished labeling some folders when he hadn’t. In fact, he’d gotten about halfway through and just stopped. When I went to retrieve the folders I discovered the truth. I was especially perplexed because he’d volunteered his status, I hadn’t even asked.

Later that afternoon, I approached the employee about the unfinished work.

Me:         So [employee name], earlier today when I went to get the folder for ABC, it wasn’t there.  I thought I heard you say you’d finished labeling all the folders?

Me:         Okay, well listen. My definition of “finished” is “completely done.” Please remember that in the future, okay? Thanks.

Ov vey. I probably should have just ignored it, right?

Gently Confront the Fabricator
Sometimes you just have to bite the bullet.

Back in the day, I used to administer a pre-employment test for things like assertiveness, honesty, stress management, flexibility, etc. The test had a “candidness score,” which I thought was just as interesting (if not more so) than everything else.

The top applicant for the job rated slightly lower on the candidness score than I would have liked, and according to the test makers, said candidate was likely engaging in a bit of impression management. (By the way, a 2006 study in the Journal of Applied Social Psychology stated that 81% of people lie during interviews to make themselves “look good,” because they believe interviewers can’t take the truth.)

Anyway, I really liked this candidate, and she’d scored very well in all the technical areas so I told her, “According to the test scores, you weren’t exactly candid about some things.” And then I told her how much I really value honesty and that as her boss I would make it as easy as possible for her to tell me the truth.

She turned out to be a great employee (if a little sneaky at times), and I was glad I’d hired her and that I’d laid out my expectations from the beginning. I believe it helped us work better together.

People lie. A lot. In The Post-Truth Era: Dishonesty and Deception in Contemporary Life, author Ralph Keyes argues that “lying has [now] become as common as scratching itches.”

And Statistics Brain, compiling data from Accu-Screen, Inc., ADP, and SHRM, reported in 2012 that 53% of resumes contain untruths and that 70% of college students say they’d lie to get a job.

So, what will you do when your employee lies to you?