Blacks Are More Racist Than Whites and Hispanics, Poll Says 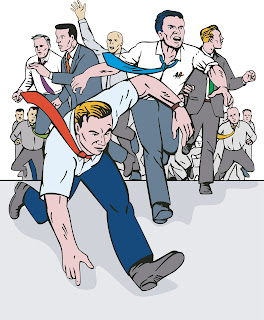 Today I was forced to look up the meaning of the word “racist,” after reading about a Rasmussen poll declaring that most Americans (including black Americans) consider black people more racist than any other group.

Now, perhaps you’d think that with all I’ve written about racism, I’d know the definition, right? Makes sense. But no, I needed to consult the dictionary, because dude from angrywhitedude.com gleefully wrote that this poll proves what he’s known all along—“blacks hate white people”— and, this may surprise you, but I don’t happen to believe that hate and racism are the same, so I wanted to see what the dictionary had to say about that.

And here’s the definition from yourfreedictonary.com:

rac-ism The belief that race accounts for differences in human character or ability and that a particular race is superior to others.

See? Not the same. And, this is assuming I agree with Dude, which I don’t. Dude’s site is dedicated to the “defense of the most ridiculed and unappreciated being on planet Earth…the white male” so that tells you where HE is.

Anyhoo, this has got to be the most ridiculous poll EVER, and I’m not saying that because black folks come off looking bad. After reading that nearly 30% of Americans supposedly believe race relations in the United States are either good or excellent, I decided this poll was a bunch of ...

Who are these people that believe race relations in the States are so “excellent?” I don’t think they exist. Did Rasmussen poll a bunch of six-year olds? That'd be my guess. I don’t know a single ADULT person of any race who believes that race relations in the States are excellent. (Well, okay, maybe one or two people, and these happen to be two of the most racist people I know. And they aren’t black either.)

Seriously, race issues in this country are abysmal. Which isn’t to say that individuals of different races can’t have good relationships, of course they can. And wait for it … it’s a cliché, but it must be said … some of my best friends are white. (Not to mention my husband, who’s not exactly my best friend, but that’s another story and has more to do with my feelings about friendship than anything else. But I digress…)

For goodness sakes, people, we’re still arguing over the use of the n-word! "Black rappers use the word all the time but a white cook can’t? Why is that?" Because, okay? (Why do you care? That's my question.)

I can say my momma is fat. You better not say jack. You better not even nod your head. Get it? It’s that simple, and we’re still arguing over it! That’s how excellent race relations are.

A black actress gives her support for a white Presidential candidate, and she's sent a bunch of hateful Tweets. That’s how excellent race relations are.

A writer can blog that white managers won’t hire black people because they might later sue, and his readers chime in with “uh huhs” and “oh wells” along with complaints about the ONE DAMN BLACK PERSON on the job who must have gotten her position through affirmative action, and I just …  ugh.

That’s how excellent race relations are.

So, basically what I'm saying is ... Rasmussen can take its poll and shove it.