Anthony Weiner Is No Bill Clinton 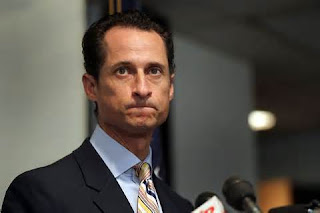 I got a kick out of the news reports that Bill and Hillary Clinton were reportedly annoyed about comparisons between Hillary Clinton and Huma Abedin, Anthony Weiner’s wife.

As just about everyone must know, Anthony Weiner is campaigning for the upcoming New York mayoral election, this despite leaving Congress two years ago in disgrace after pictures of his naked nether parts were found floating on the web. Sigh.

According to the New York Post the Weiner campaign has been making the comparison as a way of saying to voters, “Hey! Remember how you forgave Bill Clinton after his sex scandal? Give me some of that love! I can be rehabilitated too!” Or something like that.

But the Clintons aren’t having it.

A “source” is quoted as saying “The Clintons are pissed off that Weiner’s campaign is saying that Huma is just like Hillary. How dare they compare Huma with Hillary? Hillary was the first lady. Hillary was a senator. She was secretary of state.”
Listen, I get if the Clintons don’t want Weiner dredging up all their old dirt just to advance his own seemingly hopeless cause. But the comment from “source” is so silly. You can’t erase the ugliness of a public sex scandal with your job title.
But I’ll agree to this—Anthony Weiner is no Bill Clinton. It’s a fact. Clinton, despite all his stuff, has big-time likability factor. Weiner … not so much.
During a discussion on The Five yesterday, host Kimberly Guilfoyle put it this way:

“…Bill Clinton was Teflon. He's the ultimate NASA space tested version of Teflon. Plus, some women I hear find him sexy.

Now, Weiner, me don't think so. And then I find myself wanting to take a lot of Pepcid AC for the acid reflux I'm already feeling because I agree with Bill Maher. I cannot believe it. That's the one thing the guy said that I agree with, the hypocrisy, because all of a sudden it is OK if you're Clinton. But if you're not, then forget about it.”

So, I don’t know, it just amuses me that Weiner’s camp would consider this a viable strategy, when it’s so obvious Weiner doesn’t have Clinton’s je ne sais quoi.

I guess you can’t blame Weiner for trying, though.
Posted by Unknown at 10:12 PM