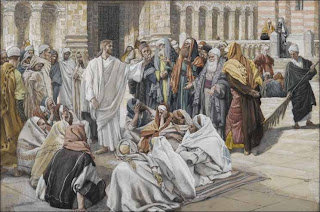 In the old days, the Pharisees were a sect of religious leaders known for emphasizing strict interpretation and observance of the Mosaic law.

Jesus was not a fan.

He accused the Pharisees of following the letter of the law without understanding its spirit. In fact, he went so far as to claim that the Pharisees missed the point completely.

In one story of the bible, Jesus happens upon a man with a withered hand. The Pharisees ask Jesus, “Is it lawful to heal on the Sabbath?” They were trying to trip Jesus up, hoping to catch him in a misstep they could then exploit.

“What man is there among you who has a sheep, and if it falls into a pit on the Sabbath, will he not take hold of it and lift it out? How much more valuable then is a man than a sheep! So then, it is lawful to do good on a the Sabbath.”

Jesus then implores the man to “Stretch out your hand!” and when the man obeys, his hand is made miraculously straight and completely functional. The Pharisees go away grumbling, plotting how to murder Jesus.

‘Fess up. Have you ever practiced HR in the tradition of the Pharisees? Have you ever placed more emphasis on rules than results? Did anybody appreciate that position? I’m guessing no.

With all the talk (still) about HR getting a seat at the table, one thing we can do is not act like a Pharisee. Rules are important, and the law is certainly important, but a willingness to solve a problem creatively is just as important, and none of these is mutually exclusive.

Additionally, the law sets minimum standards—there’s nothing to prevent an employer from going beyond the minimum if there‘s good reason to do so, and you never want to be like those leaders who were so in love with their rules they regarded good things—like a man with a healed hand—as a problem because that good thing didn’t come about in a way that met with their approval. That's both unreasonable and impractical, and that fact won't escape your bosses or your peers.

Of course, the irony is that Jesus knew the rules and followed them perfectly. It was the Pharisees, while making up rules to protect the rules, who’d lost sight of what was true.

Good HR does not operate in a vacuum. And good HR does not exist to perpetuate itself or its rules. It’s a service function, meant to provide service to the business and the internal and external customers of that business.

So approach solution finding as though you’re offering a service, or you’ll be as useful as the Pharisees, and I’m pretty sure they’re not around anymore.