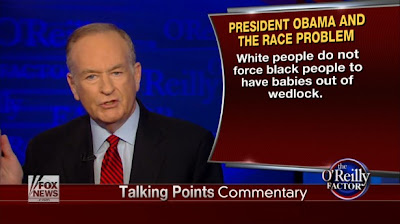 Bill O’Reilly is on a mission.

Single-handedly, he wants to solve the African American Problem.

This actually would be funny, except that um … it isn’t.

Apparently, O’Reilly has had it up to here with all the recent talk about racism against blacks. His position is yeah, racism exists, but the biggest problem African Americans face is the crumbling of the black family. And he wants to know why no one except him is speaking up about this. He wants to know—why haven’t leaders in the black community run promotions and campaigns urging little black girls to keep their legs closed? (Okay, he actually said, “stop getting pregnant,” but what I heard was the thing about the legs.)

Well, you have to give the man props for courage, I guess. Going on national television and asking young black girls to stop having babies is not for the faint of heart. Instead, it’s the quickest way to be accused of being a "super racist," and I’m guessing allegations of O’Reilly wanting to extinguish the black race can’t be that far behind.

Having children that you can’t afford and aren’t emotionally equipped to raise is not a good thing, and it is tearing down segments of the black community. But, telling women to stop having children also isn’t good, for a whole host of reasons, not the least of which is—no one’s going to listen to you.

According to the Centers for Disease Control, in 2010 nearly 41% of children were born out of wedlock. That’s a pretty big percentage. So it’s clear that out-of-wedlock birth is a widespread cultural issue that is in no way limited to the African-American community.

And so you say, “Well dear, those women are rich. They can afford to care for their children.”

Because a woman would be well within her rights to respond, “Poor people shouldn't have kids? Are you serious? Money doesn’t make someone a good parent! And besides, whether I have children is none of your damn business. You can’t tell people to stop having kids! You stop having kids!”

See what I mean?

(And by the way, at age sixty-three, some might criticize O’Reilly for having a ten-year-old. Just putting it out there.)

And I have to say, I have difficulty reconciling a belief in God with the idea that some children shouldn’t be/shouldn’t have been born. In fact, I can’t reconcile it.

So here’s what I say.

No, you don’t have to be rich to have children. I certainly wasn’t/am not.

But if you’re going to have children, young black ladies and gents, then it is time to man up. (Gee, I’ve been saying that a lot this week.)

Commit to your partner, complete your education, and seek employment that will allow you to support said children. No complaining (at least not prolonged complaining) about what you don’t have, who won’t let you do what, and how things aren’t fair. We know shit’s not fair, okay? But you have a child now, so forget all that. If your family can’t or won’t help, then please avail yourself of the many agencies—governmental, private, religious, and secular, that are in business to help you on your way.

This is not the time for standing on can’ts, because you must. Otherwise, we’re going to continue to have what we have.

And that’s not good.