Good to Know: Insights from Your Black Friend™ 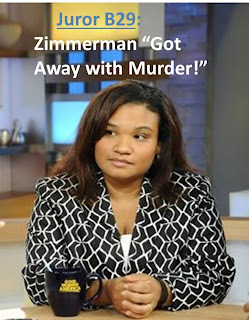 Last night I was watching Laura Ingraham stand in for Bill O’Reilly, and the topic was “Juror B29” in the Trayvon Martin/George Zimmerman case.

The juror has gone on record as stating that Zimmerman “got away with murder,” telling ABC’s Robin Roberts that “in our hearts, we felt he was guilty.”

While reporting the story, Ingraham was dismissive of the juror, claiming that since Zimmerman had been acquitted on the basis of self-defense, he wasn’t a murderer and couldn’t have “gotten away with murder.”

“That’s what it means to be acquitted,” Ingraham said. She didn’t end her sentence with “ … you dummy,” but I’m pretty sure she meant to.

Ingraham then went on to offer some blather about appreciating our legal system and respecting the jurors' decision. Blah, blah, blah.

And here’s my issue. I’ll bet dollars to donuts that when OJ Simpson was acquitted, Ingraham had no problem with anyone who wanted to state, loudly and passionately, that he “got away with murder.”

I don’t know this for a fact, but I’m taking my cue from stuff like when Ingraham celebrated the cancellation of OJ Simpson's "If I Did It" project, calling it a victory for “decency and commonsense.”

She said, “Think about how disgusting it would have been to celebrate a person most people think murdered two people.”

(But Simpson was acquitted, Laura. Doesn’t he now have a right to make a living? Why can’t we just leave him alone and respect the decision rendered by our judicial system, our wonderful system, the best in the whole wide world?) Yeah …

Perhaps because Ingraham believes Simpson is guilty as hell, despite the jury decision? Oh my. Say it ain't so.

And of course maybe he is guilty as hell. I’m not arguing that point today.

My point is that when it suited Ingraham, she had no problem questioning the justice system. Apparently, however, Ingraham believes that questioning such things is a privilege reserved solely for her and those who agree with her.

And I have to believe that Ingraham knew damn well that when Juror B29 made her comment about Zimmerman the juror wasn’t confused about the legal definition of “acquitted.” Instead she was saying, “I don’t believe justice was served.”

So, come on, Ingraham. Don’t YOU play dumb.

Okay. Are you ready for an insight from Your Black Friend?

Friend, when your friend of color has a few complaints about our justice system, don’t act like she’s an idiot. Even if you have a law degree and she doesn’t, okay? That’s not important, here. Especially if you have evidence your friend is not seeking clarification of the law but is instead making an emotionally based statement.

Understand that you aren’t the only one entitled to express a bit of righteous indignation every now and again, alright? And when you act as though you are, as though only what you deem a valid complaint is valid, you come off as superior, obnoxious, hypocritical, a little silly, and oh yeah, a bit racially insensitive, if not outright racist.

Toodles! (And trust me, I’m in your corner.)