Thinking of Hiring Your Kind of Liar? Think Again 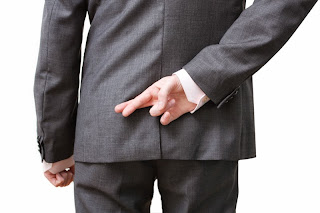 There’s a certain type of leader you only have to work with for … oh … 5 minutes, before concluding that she sucks.

Why? Because said leader is extremely talented at making everything about her. As far as she's concerned, you and your opinions are garbage. (So if you’ve ever wondered why this manager always looks like she smells something bad, well, that’s why.)

Depending on how long the individual has been in the workforce, she may have learned to solicit your opinion every now and again (having been told that this is what good managers do), but you quickly discover she isn't listening, and she'll never use the information, or barely acknowledge you offered it.

Like me, you may have wondered more than once how these damn people keep getting hired into positions of authority. Their self-centeredness and near pathologic need for control can’t be hidden.

Could it be someone else in authority actually detected these traits during the interview stage and hired the person anyway?

Itching to hire "my kind of liar"

Considering everything we know about the psychology of talent sourcing, including how hiring managers often extend job offers to people who remind them of themselves, I’ve concluded that some of these truly awful leaders are brought on board because the hiring manager, who considers himself or herself a little cocky—but in a good way—believed this individual’s “edge” would be beneficial for the business.

“Jamie’s a little haughty, but I like that. You need confidence in this game to get things moving. And I know she’s probably exaggerating her accomplishments a little, but she’s just trying to make a good impression. I like that, too. A bit of boldness never hurt. Plus, Jamie’s got great technical skills. I think we’d be lucky to have such a poised, aggressive, and knowledgeable person on staff.”

For the love of all that’s holy and good, employer, please … stop right there.
You know this person—not!

Once upon a time, I hired a man (let’s call him Pete) who exhibited humor, charm, and flawless professionalism. He had a great resume, too.

We had a good time during the interview. My BS meter went off once or twice, but I was having too much fun to pay it any mind. In my foolishness, I chalked Pete’s braggadocio up to youthful exuberance.


It took me a few months to untangle Pete’s half-truths and outright lies, but boy was that a life lesson! (Also, Pete’s former manager and I became friends, which was nice.)

But I KNOW I’m not the only sucker to have hired a total fraud, all because I saw something of myself in this person and figured, “Hey, I’m okay, so he’s okay.”

I gave the recruiter who found Pete hell, but most of the blame fell squarely on my shoulders. Live and learn indeed.

There’s a common misconception that because we all tell lies, we should presume the liars we encounter are harmless.

Despite my poor decision, I got off easy. Pete was not hired into a management position, and his performance tipped me off almost immediately that something was rotten in Denmark. Within a few months, he was gone.

Still, I implore you—don’t allow a trickster to slither into your workplace out of a mistaken belief that lying during a job interview is expected, and therefore it’s not only harmless but evidence of a savvy jobseeker/healthily ambitious worker who’s only doing what any one of us would do to get a job.

Instead of “your kind of liar,” you might find yourself with a deceiver like none other; one who wrecks your team, compromises your brand, and wastes your time—and that’s if you’re lucky.