The Dark, Dark Side of Office Gossip 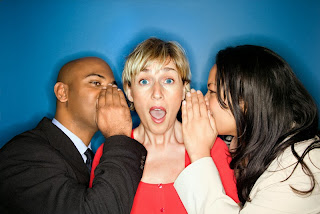 I’ve read plenty of articles about how office gossip is good for your career, because it keeps you in the know and may even help to increase office efficiency.

But there’s a nasty, dark side to office gossip that has nothing to do with mere unkindness.

Gossip and other forms of negative or unethical communication are used to do extreme harm to targets of workplace bullying or mobbing.

Look, I’ve written so much about workplace bullying, sometimes even I get tired of hearing about it.

But my weariness doesn’t change the facts. Whatever you call it—workplace aggression, workplace incivility, workplace bullying, or workplace mobbing (for the record, mobbing varies in some ways from bullying, but the two go together like peanut butter and jelly in my view)—it’s a big, icky problem that really hurts people.

And it doesn’t have to be this way, except so many of us (even me on a bad day), want to shake our heads and say, “Oh well, people will be people. You can’t legislate civility.”

Fine then. Here’s my question.

Have you ever participated in unethical communication at work, and in so doing, either wittingly or unwittingly harmed the reputation, livelihood, or sense of self of another?

If so, what’s done is done, I suppose.

But whenever you get another chance to say “no thanks” I urge you to take it.

Gossip isn’t always as harmless as it's made out to be. There may be an agenda afoot that, if you knew the details, would floor you with its malevolence.

Do I sound paranoid?

Mobbing happens. People do get forced out of organizations through no real fault of their own. And the process is facilitated by backroom, seemingly benign “talk” that quickly spreads until the target is firmly established as the “other” that must be neutralized or eradicated.

So, if some care to claim that gossip is a productivity-enhancing tool, and they have the data to back up those claims, well … I say that’s real interesting—even while I maintain my right to believe that’s a load of self-serving bunk.
Posted by Unknown at 11:42 AM