Stick a Fork in You Voice Mail, You're Just About Done

A few days ago, I missed an important call and so undertook the horrendous task of setting up my home voice mail and checking all my messages. 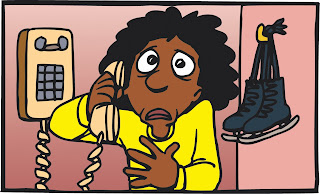 Wait. Let me back up a bit.

In a fit of irritation, I’d unplugged my landline phone and thrown it into a box somewhere. It seemed like the right thing to do. Only annoying people (i.e., telemarketers) called, and I absolutely hated the sound of the ring.

Recently however, I decided to plug the phone in again and use it as my office phone, since it does give better reception than the $10 cell phone my oldest son bought me (another story for another day) … except I couldn’t actually find the phone. So, I bought a new phone and plugged that in.

And shoot. I missed the phone call, and I could see that I had messages, but I had no idea how to access the messages. I hit every button on the phone and read every line of instruction in the package insert, but no luck. Finally, I did a Google search and learned that I needed to set up my voice mail with my phone provider. Sigh.

I got it all straightened out, and then I began to listen to my voice mail messages. All 150 of them, with the oldest going back three years.

I have never been so bored in all my days. Of those 150 messages, I ended up saving one—a cute message from my oldest son to my youngest about some video game battle they’d entered into.

There was a message from Adam’s high school history teacher about a test rescheduling (Adam is now a Junior in college).

There was a message from a friend who said she’d go ahead and try me on my cell (good move, Michele!).

There were the obligatory sales messages.

And there were several messages from a somewhat seductive sounding Red Cross employee named Willetta who is apparently quite desperate to get her hands on my husband’s platelets. (Ed, would you please give Willetta your cell phone number??)

And oh, the important call I missed? That caller didn’t leave a message.

It took me nearly an hour to listen to all the messages, even after I learned that I could hit 77 and delete the speaker’s voice mid-sentence. Thank you, Lord.

I think of all this and am reminded of that New York Times article by Nick Bilton, in which he declared those who leave voice mail messages as “impolite” wasters of his time.

Bilton was criticized heavily for his stance (well, he did brag that he and his mother now communicate only via Twitter), but I agree (at least in part). The process for accessing voice mail just sucks. So many prompts. So little interest in following said prompts.

In "Is it Time to Hang Up on Voice Mail?" Jack Santos, a research vice president with Gartner, an information technology research and advisory firm, is quoted as saying:

“There used to be a time when we would know that a voice mail message would get picked up and people would respond to it right away. You just don't know any more. It could be days before anyone checks their voice mail.”

So true, Jack. And if the call was made to someone’s landline (you know, the landline you keep specifically for bothersome sales people and others to whom you don’t want to give your real number, even as you convince yourself that hey, at least you didn’t lie and make up a number), who knows when you’ll get a call back? In my case, at least three years.

Texting is still too casual a method for formal work situations, and it is not okay to text a client, a recruiter, or a prospective employer. However, I suspect that in time this will change, unless of course by then some other new and wonderful technology takes the place of texting, which is entirely possible.

And by the way, none of this means I don't leave voice mail messages.

Although come to think of it, no one actually calls me back...