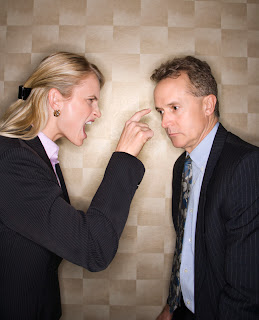 Yesterday we left off with the question, “What happens if you confront the bully, and the situation doesn't change or actually gets worse?” So let’s start there today.

This isn’t a good outcome, but you already knew that.

Well, I’m going to be honest. You’ve got two options. You can either submit to the bully, or turn up the heat in an attempt to get him to understand that you insist on being treated respectfully. Before you decide, ask yourself this question—“If I take this any further, is my company likely to protect me or the bully?”

You need to consider the answer to this question, because bullying is a nasty game of psychological warfare, and it will require mental and physical stamina to engage in this battle. That’s why yesterday’s advice was that if you’ve been compromised to the point of near-daily bouts of tears or regular displays of anxiety, now is the time to retreat to the safety of your physician’s office, not risk further injury by dealing with this junk head-on.

Remember that in seventy-seven percent of cases, the bully is protected by the group. And when you decide to not submit to the bully, you are stepping out of that group, and there’ll be a price to pay. So before you decide on your next move, you’ve got to get prepared for what likely lies ahead.

If you determine that confronting the bully further is not worth the risk, that’s okay. If you can make your deal with the devil and be at peace with it, I won’t judge. Maybe you can’t risk losing your job. Maybe you’re near retirement. Maybe you can devise ways to limit your time with the bully. I truly wish you the best.

But if none of this applies to you, and you must forge ahead, ask yourself  “Is this bullying behavior typical or atypical for my company?” and “How much do I trust my boss?” Again, bullies find shelter within the group dynamics. Is your boss part of that dynamic? Make sure you know the answer to that question before taking the next step.

I’m going to be optimistic. Let’s assume that you work for a decent company that doesn’t tolerate a bunch of crap behavior or you work for a decent boss who doesn’t tolerate a bunch of crap behavior being dumped on her employees. Great. Now’s the time to go straight to your boss and let her know that you’ve tried to resolve this situation like an adult, but the other party is not amenable. Make it clear that you need her help. She’s a decent boss, and she’ll handle it. Hopefully, that’ll end the situation. After being confronted by your boss (again, all this assumes that the bully is not your boss), the bully should back off, at least for a while. He might need reminding every now and again, of course, as old habits die hard, and make no mistake—bullies have learned that their vile aggression works. Bullying has indeed become a reprehensible, and in many cases, life-long habit.

Now what if, after pondering the issue, you decide that the company is likely to protect the bully? Well, again, assuming your boss is not the bully, you’re still going to approach her, but you’re going to do two other things first—(1) prepare yourself mentally for the problem to be downplayed or ignored and/or prepare yourself to be blamed as the cause of the problem and (2) prepare yourself to listen very, very closely, because you’re going to take careful notes of this meeting immediately following it. In fact, you will now be documenting everything, including every incident of bullying. I know it sounds like a pain, but I’m telling you, do it. You’re going to need those notes later.

Tomorrow, we’ll pick up here, and I promise to get to that whole bit about end game. Until then, I want you to remember a couple of things. One, what’s happening to you is wrong, and you don’t deserve it. Two, no matter how your bully (and his supporters) have tried to convince you otherwise, you’re not a worthless loser. In fact, it’s likely the bully envies something about you. (Remember beautiful Cinderella and her two nasty, ugly-mug sisters?) Keep that in mind, okay?
Posted by Unknown at 10:17 PM