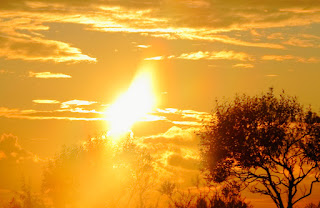 Tonight I attended an Ash Wednesday service for the first time in I don’t know how long. I’m a regular church goer, but I’ve never paid a whole lot of attention to Ash Wednesday. However, today was different, because my brother and two of his fellow seminary students were preaching during the service, and of course I had to go and support my brother.

All of the preaching was a blessing (and as an added little something, one of the other students was actually a preacher I’ve known for years but hadn’t seen in a while—I had no idea he and my brother were in the same class), but the sermon that resonated with me the most was titled “Morning Is Coming!” This was not the sermon my brother gave, but I think he will forgive me, because I’ve a feeling this sermon resonated with him as well.

The sermon text was Lamentations 3:19-24, with a focus on verses 22-24: “The Lord’s lovingkindnesses indeed never cease, For his compassions never fail/They are new every morning; Great is Your faithfulness.” The themes of course was—adversity will come, but it won’t last. Morning is coming.

Now, there’s nothing particularly earth-shattering about this theme, especially to a mature believer. But, I’ve found over the years that sometimes the most basic messages are the ones we need to hear over and over and over again. Because I don’t know about you, but I’ve had some trials in my life, and when you’ve hit the eye of the storm, or what you might call the peak of the trial, that place where you’re feeling especially alone and unloved and unliked even, and you’re wondering why stuff is happening like it is, because it really hurts, and you just want it to stop—at times like these, it is good to be reminded that this too shall pass. And not because “time heals all wounds” as they say, but because God is alive and doing something marvelous and purposeful and edifying, and before too long, you’ll get a hint of what that might be, or to put it another way, “Weeping may last for the night/But a shout of joy comes in the morning” (Psalm 30:5) And oh, by the time this line was preached tonight, people, including my brother, were on their feet.

This is such a simple message, but one filled with much-needed hope and love.

The bad stuff only lasts for a season, and just you wait, morning is coming.