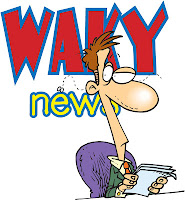 Here are five of the most intriguing/ hilarious/crazy headlines I've seen this week.

From Clutch Magazine
Landlord Goes Ham on Tenant’s Butt for Unpaid Rent
A tenant is late with the rent, so the landlord gives him an old-school whupping.

From Gawker
World’s Coolest Boy Calls 911 So He Won’t Have to Go to Bed; Gets to Stay Up Late AND Meet a Cop
A young boy and his mom disagree about bedtime. He gets a little huffy, and she tells him to call the cops. Then he does.

From The Onion
Area Man Panics After Accidentally "Liking" 381 of His Ex-Girlfriend’s Facebook Photos
He didn’t mean to do it, but it kept happening over and over and over again anyway.

From Jezebel
Nebraska College Kid Says Feminism "Achieved Its Goals" So Women Should Shut *** **** Up Now
Heavy sigh. I almost didn’t include this one, because the “Nebraska college kid” who wrote the piece being lambasted in Jezebel is, well … a kid. But I read his piece, and his opinions are so obnoxious, I’m going for it. He had me at “No longer do people need to be risk takers, strong and resilient to survive in the world. So, in an economy that relies on communication and thinking over physical strength, women are excelling …” Sure dude.

From the Grio
Man Fired After Being Charged with Slapping Toddler, Using N-Word on Flight
The firing part is not so surprising, but the rest sure is. An apparently inebriated man gets his knickers in a knot over a crying toddler and decides to take matters into his own hands. I hope this guy gets into treatment sooner rather than later and that he enjoys paying this kid’s college tuition.