Work-Life Balance—It Doesn’t Exist, Okay? Get Over It 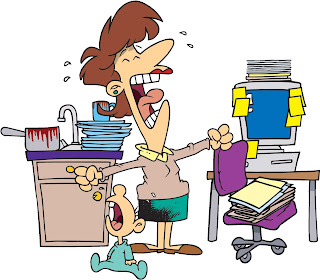 It had been a stressful day in a stressful week, and the young woman who reported to me confided her concerns about her ability to satisfactorily manage the responsibilities of both home and work. She’d recently had a baby and just wasn’t sure she could handle everything.

I sighed. I’d had my oldest son while in college. I now had three sons, spanning in age from eighteen to three years. In other words, I’d spent my entire career as a working mom, and I knew—the reality of work-like balance, or “having it all,” as some women called it, often failed to live up to the hype.

So here I was, about to bust someone’s bubble. Again.

I told her, “It’s entirely possible to have a career and be a mom. But, you’ll have to make some hard choices along the way. Sometimes work has to be your priority, and sometimes family has to be your priority. So, you’ll probably feel guilty a good bit of the time. But if you want to do this, identify the people in your support group and expect to rely on them from time to time.”

“Listen,” I told her. “Only you can determine what kind of parent you want to be and whether working full-time will allow you to be that kind of parent. There have been times in my career when I’ve decided that work interfered with the kind of mom I wanted for my children, and I had to make some changes.

Let Me Tell You a Little Story
I said, “When my older sons were little, they rode the school bus home. Usually the bus was late. One day I was working on something, I can’t even remember what, and I left work a little late, thinking it’d be okay. Unfortunately, the bus was early, and I was not there to meet it.

My sons walked home with a friend, but the friend’s mother wasn’t home, and the friend was under strict instructions to not let anyone in the house if Mom wasn’t home. So my sons walked to our house a few blocks away, hoping I’d be there. I wasn’t.

They knocked on the door of my neighbor, the one I don’t get along with too well, and she wouldn’t answer the door. So they sat on our front steps and waited.

When I got home, about twenty minutes late, saw my sons on the steps, and heard what had happened, I’d had it. This won’t happen again, I told myself. I would not have my 6- and 10-year-old sons wandering around the neighborhood, waiting on me. And I believed they were too young to be 'latch-key' kids.

The very next day I told my boss, 'I want to work part time.'

He was a great boss, and I was a great employee. He asked me to write up a proposal, and I did. We agreed on a trial period for the new schedule, which I was still working three years later.”

(I left out the part where I’d told my boss that I wouldn’t accept a reduction in pay, because I’d  already taken a pay cut to take the job—and he agreed. Come on. I was a good manager, not a saint.)

And Yet …
But there were other times, I told her, when I made the choice to focus on my career, and those were the times I relied more heavily on my husband.

This employee was married, but as a manager and a woman, I certainly knew better than to ask about her husband and where he fit in all this. However, I felt completely comfortable telling her what had worked for me.

The Last Straw
Still not content with my answer she sighed. “It’s good that your husband can help out.”

Did I mention that it’d been a stressful day in a stressful week? Yeah, I did, and I admit it, I was feeling a little exasperated at this point.

However, calmly I replied, “My husband and I negotiate these things. And other times we just fight.”

She said nothing after that, for which I was grateful. It’s not that I’m lacking in empathy. Far from it. But I desperately wanted this young woman to know that life involves choices. Building a career involves choices.

You’re Not Gonna Like This, But …
We’re not talking about a single mom making barely more than a living wage. She doesn’t have the luxury of debating the finer points of work-life balance. She has to do whatever she has to do to provide for her family. But career women, who work as much for the enjoyment of the work as for the financial rewards, need to understand as well that, quite frankly, their choices are their responsibility. I know, the truth hurts.

Hear Me Out, Please
Now, don’t get me wrong. As a manager, I provided flexibility both proactively and reactively. But the employee has got to act like a grown up.

Decide what you want. Ask for what you need. Be willing to negotiate and compromise. Lean on your support system.

And get used to the guilt.
Posted by Unknown at 9:16 PM