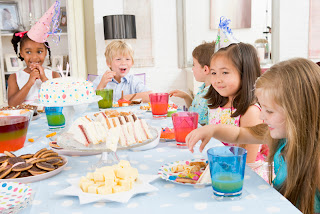 I woke up this morning in anticipation of the things I’d need to do for Thomas’ birthday party. Thomas is nine years old today.

The party was being held at a neighborhood art studio. The studio is located in an artists’ condominium, which is a very cool place to be. All the residents are visual artists, and when you enter the building and pass through the common entry and the mailboxes you'll find yourself in a long hallway with the walls on either side clad in fabulous art that changes frequently. If you enjoy being around creative people, like I do, you’d feel happy in this space.

Thomas used to take Saturday morning art classes at the studio (and he will again when I don't have to wake up in the cold and the dark for it to happen), and his teacher is great with kids and really a kind soul. During the party, some of the parents hung out with the kids in the studio proper, while others sat in the kitchen/dining area and talked.

But before we could get to the good stuff, that is, the chatting and the snacking and what not, I had a few things to do. Not a whole lot, but I did have to swing by the grocery store and pick up chips, pretzels, soda, ice-cream cups, plates, plastic cups, and ice; order the pizza; and then set everything up at the studio.

I needed Ed to pick up the chicken ("Seriously Mom, fried chicken? How ghetto."), and I hated to ask him, because he started the morning annoyed that he couldn’t find the iron. I avoid ironing as much as possible, so I hadn’t seen it. Ed texted Christian, who had left the house much earlier, and it turns out that Christian had taken the iron for an arts and craft lesson he was giving at the orphanage. Orphanage? What orphanage? When did Christian start working at an orphanage? Does Philadelphia even have any orphanages?

Ed said, “Great. So now the iron is going to come back with melted glue and glitter and shit on it.”

I said, “I love that boy to death, but we’re going to have to have a little talk. He can’t just take our stuff out of the house. Next thing you know the iron won’t work, and he’ll be like ‘I didn’t break it. What makes you think I broke it?’”

Sigh. Later at the party, I tell my sister-in-law this story, and she says, “Crystal, save yourself the aggravation and just buy another iron tomorrow. Don’t even check the old iron. Just do it.” I tell her that’s a good idea.

Everyone seemed to have fun at the party, which made me glad, because even though most of the guests know each other, some didn’t, and sometimes when you try to combine people from different pockets of your life it doesn’t work. But today I think it did. I know Thomas enjoyed the celebration, even the part when everyone sings “Happy Birthday” and he had to blow out the candles on the cake. Granted, he scampered away as soon as humanly possible after the last flame died (like his Mom, he does not like to be the center of attention), but I could tell he was happy just the same.

Happy Birthday, baby! It doesn’t matter that I cried for two weeks after learning I was pregnant with you. (Cut me some slack, okay? I was thirty-eight and already had two children aged eleven and fifteen.) I love you and could not imagine my life without you!
Posted by Unknown at 11:01 PM