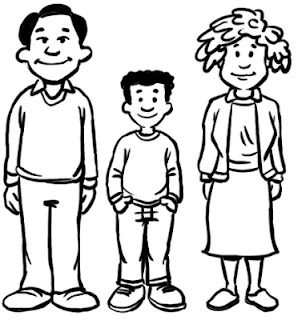 I finally got to meet Devin’s mom, Jenny, a couple of weeks ago at a baby shower for Jenny’s niece. Devin is a friend of Thomas’ from summer camp, a very nice little boy who is totally unimpressed with Ed, and that kind of tickles me.

During the summer, Ed dropped and picked Thomas up from camp, so he was familiar with Devin’s family, but I wasn’t. He told me that the family was from Puerto Rico, and knowing that the camp caters to the Latin community I didn’t think twice about it.

So, I meet Jenny, and I’m surprised because—she’s blond. I know there are Latin people with blond hair, but I wasn’t expecting that. Devin is dark haired.

It turns out that Jenny, like Devin, is very nice, too, and she’s unimpressed with Ed as well, meaning she doesn’t pay his silly comments any mind. Here’s an example.

After stopping to chat with us for a while, Jenny starts to walk away to greet some family members, and Ed notices that the cord to her phone charger is spilling out of her purse. He tries to get Jenny’s attention, but there are lots of people at the shower, and she’s no longer facing us, so he grabs the cord and the charger comes with it. Quickly, Ed winds the cord around the charger and drops the bundle in Jenny’s purse, which does get her attention. She turns and says “Oh!” Ed makes a bad joke that carrying your phone charger around must be a “Puerto Rican thing,” and while I’m deciding whether I’m going to slink under the table or call him out Jenny waves dismissively at Ed, rolls her eyes, turns toward me and says, “I keep telling him I’m not Puerto Rican.” So I say, self-consciously, “What is your ethnicity?” feeling like a real jerk as I’m asking, but I want to know. She’s says, “I’m Irish.” I think to myself, “That freakin’ Ed!” She tells me her maiden name, and yeah, it's Irish. It’s funny, because she sounded like she had a Latin accent to me, but I could have been hallucinating. It happens.

This reminded me of the time Christian and I were at a pizza joint at the mall, I think he was around fourteen, and the cashier, a young woman of color probably around seventeen or eighteen at the most, asked me “What is he?” I said, “Hmmm? Are you asking about his ethnicity?” And she said, “Yeah.” Both taken aback and intrigued by her forwardness I said, “My husband is white.” She replied “Ohhh.”

Then there was that time on the bus when Christian was a baby. I was taking him to my friend’s, who used to watch Christian while I was in school. During the ride, I’d noticed two older women, one white and one black, sitting together and chatting. When the bus got to my stop, I stood up, and as I passed by the women I saw the white woman lean closer to her bus mate and say in a lowered voice, “You mark my words, that baby’s father is white!” Duh, I thought, the kid is pale as a ghost. This happened more than twenty years ago, and I don’t believe I’ll ever forget the woman’s words, because I found the phrasing so odd. “Mark my words?” You say that before uttering something significant like “Mark my words, Hilary Clinton faked that concussion” or “Mark my words, Kim’s baby belongs to Kris Humphries,” or “Mark my words, the US is headed the way of ancient Rome.” It seemed silly to say that about Christian’s ethnicity. This woman had no expectation of ever seeing us again—how were we to “mark her words?”

But the real question is, why does someone’s ethnicity matter to us? Because let’s face it, it does matter, and inquiring minds always want to know. Also, nothing bothers some black folk more than when someone of mixed race refuses to 'fess up and take sides—that’s why we like Halle and Tiger got absolutely no love from us during his sex scandal.