Your Family Is Bad for Business

Facebook COO Sheryl Sandberg has gone on record as saying that companies should be able to ask women about their plans to have children.

Because The Civil Rights Act of 1964 (commonly referred to as Title VII) prohibits employers from discriminating again applicants and employees on the basis of sex, and the Pregnancy Discrimination Act prohibits employers from discriminating against applicants and employees on the basis of pregnancy, employers generally will avoid this topic, so as not to appear biased and/or gain access to information that could make them vulnerable to bias claims.

Now, I don’t know Sandberg, and from what I’ve read she makes a very healthy living doing what she does, so I have to assume she has good sense. And yet, when I read her recommendation and then this statement, “Every HR department tells you not to do that … but we need to have a much more open conversation …” I can’t help thinking that Sandberg is an out-of-touch, boneheaded business leader who doesn’t know her ass from her elbow. 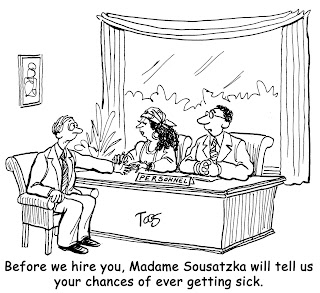 These laws are in place for a reason, Sandberg, and they were enacted reactively, meaning bad stuff happened and then someone decided that perhaps women needed some protection against prejudice and bias in the workplace, even beginning with the applicant process. And now you, Miss Smarty-Pants, want to come along and say “Oh, silly HR! That’s old school! We’re all so much more evolved now! We should be able to talk about these things openly!”

As the Brits say, “Bollocks!”

On Fox News this morning, Sabrina Schaeffer, Executive Director of the Independent Women’s Forum, said she agreed with Sandberg. “The reality is that when women take off time for maternity leave and when they have children and families … it takes time away from the workplace. It has a real economic cost to business that we need to consider.”

Wow. Guess what Schaeffer? Broken arms cost companies money. So does cancer. And bullies. And the flu.

Gee, wouldn’t it be swell if during the interview process hiring managers could ask an applicant, “Hey, has anyone in your immediate family ever died from cancer? Because we sympathize, but those treatments are costly, and we’d rather keep our medical premiums down. You understand, right?” Or, “You're not on any anxiety medication, are you? ‘Cause we have some real sons-of-bitches working here, and they pretty much do whatever they want. Last year we even had a couple of employees file mental disability claims, and those can be a real drag on the balance sheet, you know? So let's chat now if you're the jumpy type, okay?"

I bet these inquiries would save corporations all kinds of money! Sons of bitches indeed.

Oh wait! I know how to avoid the irritating “economic cost” of families on business! How about we make sterilization a condition of employment? Now just remember, what's good for the goose is good for the gander ...

Forgive me. I’m hopping mad at this display of ignorance mystified how any working woman could think this is a good idea.

No wonder so many regular working folks hate corporations. When I first began to experiment with blogging, I wrote an article about company loyalty. In that article I argued that the corporate animal is strangely hostile to humanity, and I was reminded of that argument when I read Sandberg’s quote.

Sandberg, do yourself a favor and leave the HR stuff to the HR pros, okay? We got this. And as for you, Schaeffer … all I can say is ... ugh.
Posted by Unknown at 4:14 PM