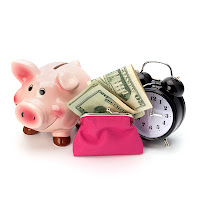 My friend collects Lenox®, and, after spotting a Lenox set of salt and pepper shakers said “If I had $12.00 to just throw around, I’d buy those.”

And that’s how I got a glimpse into how the other half lives. The “other half” being the savers of the world, unlike my half, the spenders.

Because, if I’d wanted that set of salt and pepper shakers, I’d have bought it so fast!

I’m the person who, when she has money left over in her checking account at the end of the month and no bill due will say to herself, “Hmmm … what can I buy that I’ve been wanting?” As opposed to that person who says, “Great! More money for the nest egg!”

Both good and bad financial habits can be learned, but I’m convinced that some of this is genetic, because I’ve met folks who become positively giddy at the idea of squeezing a dollar dry. They love coupons, bargains, free stuff, and mostly, squirreling away their cold, hard cash.

As for me, I readily admit that money burns a hole in my pocket. After I pay the bills, my first thought is always spending and never saving. Thank the Lord for automatic payroll deduction, or I’d have no retirement account at all.

A few years ago, I saw a news story about an elderly woman who, upon her husband’s death, discovered that their deprived and stingy lifestyle hid a secret. Her husband was a millionaire.

Oh. My. Goodness. All I could think while watching the story was “Oh heck no! It's too bad she can't bring his dead body back to life and kick his ass."

I mean, these people had nothing. They were living in a dismal apartment somewhere and the wife had to beg her husband for extra grocery money, for goodness’ sake. Yet here he was hoarding cash like that miser in the Aesop fable. (Okay, that miser actually hoarded gold, but same idea.)

My friend the saver probably would have thought, “Well, at least he left her well off.” Yeah, okay.

But, perhaps it might be time to at least consider the joys of saving, because my husband is worse than I am, and neither of us is getting any younger.

While my husand is not an extravagant spender by any means, but he does like to nickel and dime himself on stupid stuff, and he’s the kind that considers anything low-priced a “bargain.”

Something could be old, hopelessly broken, and completely useless, but if it is low priced, Ed considers it a deal. Worse, he loves to brag about these “deals,” by saying stuff like “Don’t throw out that banjo! Those things cost $500.00!”

What matters is that once upon a time, Ed heard about a banjo that cost a bunch of money (in perfect condition and probably from some historic period and owned by a former United States President or something, but no matter), and now that he’s got his banjo, he considers it good as gold.

And so between the two of us, we’ve got some work to do.

And we will, as soon as I come back from the consignment shop.

Toodles!
Posted by Unknown at 8:56 PM

Email ThisBlogThis!Share to TwitterShare to FacebookShare to Pinterest
Labels: Home and Family, Memoir