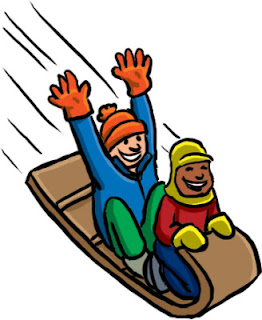 We spent New Year’s Eve in the Poconos with Ed’s family, and this was the first New Year’s I didn’t fall asleep before ten o’clock in … I don’t know how long. As I mentioned in an earlier post, I’m not particularly fond of parties, and New Year’s Eve is basically one big party … so ugh. If at all possible I’d rather sleep through it.

Adam and Christian had been visiting for a few days already when Ed, Thomas, and I joined them. Sometimes it takes Thomas a little bit to warm up before becoming sociable, but by the end of the evening he was a regular Chatty Cathy. It doesn’t hurt that his younger cousins are pretty persistent in getting his attention.

Our house in the city has more of a courtyard out back than a yard to run in, so I know Thomas enjoyed the time he spent outdoors, sledding down the hills in his grandparents’ back yard. Ed persuaded me to join them for a bit, too.

Visiting with Ed’s parents were Ed’s two sisters, one of whom is married and has two children, both girls. The husband, who is a former coworker of mine, reminded me that he and I have known each other for nearly twenty years! I almost fell off my chair when he said that, because he’s right, and the time has gone by far too quickly.

Ed’s sister and her husband met at an art viewing (he’s an artist) that I’d invited her to. I’d invited her because I had another coworker in mind for her to meet, but that guy acted like she was invisible, while her (now husband) saw a good thing and made his move. So these days, whenever this comes up, I get razzed for even thinking that _______ would have been a suitable match. Silly, Crystal! It’s all good, though. I like this other coworker very much, and he’s one of my sons’ favorite uncles. Whenever I think about meeting this person at work, having no idea that many years later my children and his would be first cousins, it blows my mind. Actually, I could also mention that Ed’s other sister and I went to high school together (and this is Philadelphia, okay, not a little town with thirty-seven hundred residents or something, and we didn’t grow up in the same neighborhood, either), and if I imagine myself walking up to her in Physics and saying “Hey, you don't know me very well, but I’m going to marry your brother one day, and not everyone’s going to like it, but it’s going to happen anyhow, and he and I will have three sons, and I’ll be hanging out with you guys in the Poconos  …” that’s a little freaky, too. You just never know what life has in store, do you?

Another year gone! 2012 had its ups and downs, and considering some of the downs, the jury is still out as to whether I’m going to end up calling it a “bad year” or one of the best of my life! Either way, bring it on 2013!
Posted by Unknown at 9:21 PM

Email ThisBlogThis!Share to TwitterShare to FacebookShare to Pinterest
Labels: Home and Family, Memoir