I love telling stories. Some real and some not so real. Everyone in my household has been bitten by this same bug. Somebody is always telling a story around here. We just like making stuff up. Here’s an example.

Adam and I were having lunch the other day, and I’d ordered a cup of hot tea, because I had a cold and my sinuses were bothering me. I was fuzzy headed and not very coordinated, and every time I opened a sugar packet, more sugar got on the table than in my cup. I said, “Wait a minute. I know I can do this,” to no one in particular, and exasperated, Adam picked an empty packet off the table and began using it to sweep the loose granules off the table. Breathing a heavy sigh of annoyance he said “This isn’t the eighties Mom! You just can’t snort cocaine out in public for everyone to see!” The family in the booth across the way sneaked a look in our direction. I laughed. In that split second, Adam had told a story. A somewhat sad story of a dysfunctional family with a leftover, stoner hippie mom and her beleaguered son, but hey, a story.

Then there’s the time Christian called and told me he’d totaled the car, after he’d just had an accident. No worries, he said, he and the other two drivers were fine. What?! Just kidding, Mom.

And the time I pretended to call the police department—“Hello? Um, I live at ______ and have an unruly child here who doesn’t listen and says he wants another Mommy. Um hmm … yes … I think he could have a bag packed within the hour …” while Thomas starred at me, panic stricken. (My brother, who was actually on the other line said “Crystal! You’re pretending to call the cops on Thomas? Don’t do that! That’s some crazy stuff Mommy would have done!”) Yes, and where do you think I got it?

And Thomas is no innocent in all this. The “pretender” gene has definitely been passed on to this one; he’ll step into character in a minute, and he’s played more tricks on me than I can remember.

One the whole, I enjoy my family’s creativity and their flair for the dramatic. It keeps things interesting. I like to think that we’re descended from African griots, keeping up the traditions of our ancestors in completely new and unexpected ways. 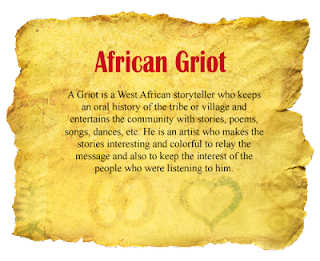