The Plastic Glove Myth and Other Fast Food Funnies

Today I’m calling out all the food servers in the world who wear plastic gloves for no darn good reason, because the mass self-delusion surrounding this practice must end.

If you’re wearing plastic gloves and then proceed to touch every surface near you, scratch your face, or God forbid, pick your nose, those gloves will not offer a layer of protection between your germs and my food. Are you hearing me? While this practice will keep your hands clean, it will not make food preparation more safe. Please, hear my cry! Just because you’re wearing gloves doesn’t mean you don’t have to wash your hands between tasks.

I was reminded of this today when, during lunch at a restaurant with my brother, he all of a sudden stopped speaking, made a face, and said “Ugh.”

Looking past me and toward the food prep counter he said, “I just saw her stick her entire hand in the bag of [tortilla] chips.”

I turned my head toward the counter and, noticing that the server was not wearing plastic gloves said, “You know that gloves wouldn’t have made a difference, right?”

“Hank! It doesn’t make a difference!” I laughed.

He repeated, “I know, but I need to see the gloves. Because even if I go home and get sick, and my belly bloats like a starving African, and my eyes bulge inward, at LEAST I will know that you didn’t intend to do me harm.”

I was still laughing when he said, “Hey! This reminds me of when I used to work at [fast-food restaurant] as a kid, and we didn’t use gloves.” 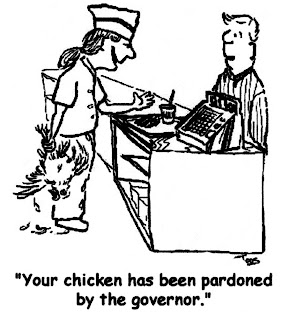 “Yeah. We’d scoop the nuggets from the wire basket with our bare hands.”

“Yeah. One time, this customer walked in and asked for nuggets. The server was about to take a break, but he decided to wait on the customer instead. But after he presented the nuggets to the customer, the customer said, ‘No thank you! I saw you put your fingers in your nose!'”

“Yeah, and the server was angry. He said ‘I didn’t even have to wait on you! I was about to take my break! I’m doing you a favor!’ ”

“And then the customer said, ‘No you aren’t doing me a favor! How dare you serve me nuggets after picking your nose!’ And the server is like, 'How dare you accuse me of putting my finger in my nose!' So they started arguing, and they’re both cursing, back and forth, and then one of them says, ‘Outside!’ So they go outside to fight.”

Hank laughed. “Nah. I forget where the manager was. And it’s funny, because he was always around. He used to say to me all the time, ‘Hank, do not hand out any packets [of ketchup]. Each packet costs three cents! You send those customers right to the squeeze bottles.’”

Hank continues, “So finally, they started using tongs to pick up the nuggets.”

Hank says, “You know how cheap these places are. Why buy tongs—“

“When the human hand is designed to do the job perfectly well?” I quipped.

“Yeah, and you know how it is. Management thinks, ‘If we buy one pair of tongs,” Hank interrupts himself—one thirty-nine cent pair of tongs—‘Then everyone will want tongs! Next thing you know we’ll need three pairs!'”

“Stop!” I tell him, still laughing.

Hank pauses and sighs. “When did work stop being fun?”

I had no answer for that.