What Does Adam Carolla Know About White Privilege? 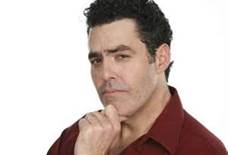 
MNC is a food shopping center where customers shop with food vouchers, or as most folks call them, food stamps. The center promises to eliminate the anxiety and frustrations of shopping with food stamps, such as those related to locating approved products.

Customers place their order with the cashier, and MNC employees shop for the customer. MNC employees also help customers carry the packages out of the store.

I call this a good idea that provides low-income mothers with more healthful food choices for their children, jobs in an economy that sorely needs jobs, and profits to bolster a sluggish market.

I call helping your customer carry her purchases good customer service. Carolla apparently disagrees. He calls it enabling and a crime against nature.

Carolla said that this type of giving (what he calls "too much giving") causes muscular “atrophy” and makes individuals incapable of caring for themselves.

He should know, he said. His mother received food stamps when he was a kid, and when he asked her why she just didn't get a job, she told him that if she did she'd lose her benefits.

I wonder if her response came before or after she called him a smart ass.

But there’s good news, here, and I'm really happy about that.

Because of his humble upbringing, he told O’Reilly, Carolla doesn’t have “the white privilege guilt" like those other media losers, because he understands “what it’s like to be on the dole.”

One might be tempted to say that Carolla is even worse than those media losers, because he has the privilege with a generous side heaping of arrogance instead of the guilt.

So, alas, but I think it’s safe to say that Adam Carolla knows very little about white privilege.

Too bad. Carolla’s comments about race are always so insightful. I was hoping he could teach me something.
Posted by Unknown at 9:38 PM