Pale, Stale, and Male—Study Examines Gender Bias in the Boardroom 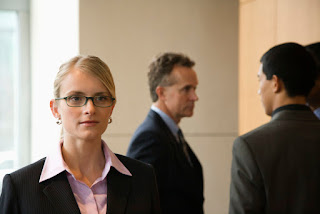 Harvard Business Review published an article this month called "Dysfunction in the Boardroom," which asks the question—“Why aren’t there more female board members?”

Well, listen. Data are important and people generally respect data. But I can’t say I was terribly surprised by these conclusions.

Why would anyone expect a boardroom to reflect more function than the corporate offices they represent, and we (women and people of color) know that the higher you go up the corporate food chain the less welcoming it tends to be.


Predictably, however, when the authors asked male directors if female directors faced hurdles that men don’t, fifty-six percent said no. And, also predictably, when asked whether women bring special attributes to the director role, forty-four percent of the male directors said no, and then supported their vote with comments like “Women—and any board member—should be judged on their background and skills, not because they have attributes based on gender, race, etc.”

This while “pale and male” occupied nearly eighty-four percent of the board seats in Fortune 500 companies in 2012, according to the not-for-profit women’s advocacy group Catalyst.

Funny how rewards based strictly on performance is always touted as the way to go when issues of exclusion come a calling.

But worse than the underrepresentation of women in board seats are the stories of some of the women in the seats. Said Groysberg and Bell:

A highly successful and accomplished woman in financial services was asked to join the board of a growing multibillion-dollar public company. She was its first and, for many years, only woman director. She brought greatly needed financial expertise to the board as well as a deep understanding of the company’s industry, yet she routinely felt shut out and stifled during meetings. Her questions were greeted not with respectful collegiality but as intrusions into the “real” conversation among the male board members.

In fact, the CEO and chairman and other male directors had taken her aside many times and asked her to be “less vocal” and to “stop arguing her point” during meetings. She related how this behavior surfaced during meetings, too, recalling one in particular at which she was pursuing a line of questions about a strategic decision when a male director interrupted her and exclaimed, “You’re behaving just like my daughter! You’re arguing too much—just stop!”
Personally, I’d be curious to know how many qualified women who’ve been asked to join boards have self-selected out, having no desire to add this brand of stress to their lives.

This past May, a Merck sales representative sued for one-hundred million dollars, claiming that Merck doesn't give women equal opportunities to advance and that it penalizes women who take maternity leave.
Barely a month later, attorney Francine Griesing and her former employer, law firm Greenberg Traurig, reached a settlement on the two-hundred million dollar gender discrimination class action case Griesing had filed earlier in December.

We’ve heard these stories before.

And we’ll hear them again.

Because gender discrimination (as well as illegal discrimination in general, in my view) is one HUMONGOUS blind spot in the corporate world.
Thank the Lord for enlightened men and determined women, ‘cause we have a LOT of work to do.

Come to think of it, I might be a feminist after all.
Posted by Unknown at 9:11 PM