Why I'm Not a Feminist

During the past five years or so, there have been many headlines bemoaning the death of feminism.

I haven’t paid a whole lot of attention to these headlines because, well—am I the only woman who doesn’t care to be called a “feminist?”

I think of “feminist,” and I think of a strident, angry, un-feminine woman who wants to be treated as though she were a man.

Or, I think of a privileged, upper-class woman, like a certain COO who’s been getting a lot of attention lately, and I think that whatever ails her means nothing to me, that she and I can’t possibly be fighting the same fight.

And so, neither of these models really speaks to who I am. Was Rosa Parks a feminist? Was Mary McLeod Bethune? Is Condoleezza Rice a feminist? I’m pretty sure Oprah Winfrey is, and you know how I feel about her. 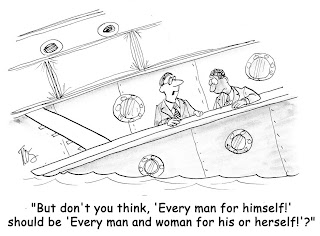 As usual, when I want to know whether I’m making a judgment based more on perception than fact, I head to the dictionary. Not the seven or eight hard-bound dictionaries on my new wall-to-wall bookshelves, heaven forbid! No, I’m off to dictionary.com. And according to dictionary.com, a feminist is someone who advocates for women to receive the same social, political, legal, and economic rights as men, and that sounds dandy, so I’m not sure what my problem is, but I definitely have one.

What do you call a hard-working, hard-thinking, man-loving, don’t-really-feel-like-no-crap-taking, I’d-certainly-appreciate-being-treated-as-human-iffen-you-pleasing kind of woman? Is she a feminist?

Well, that’s who I am. And I guess I don’t think there’s any label large enough to define me, certainly not anything like “feminist,” which sounds like of dated and doesn’t even begin to describe all that my female African ancestors have endured and fought for and died for.

So if “Ding-dong the feminist is dead,” is a new tune some people are singing, that’s alright with me.

What about you? Do you consider yourself a feminist?
Posted by Unknown at 10:34 PM