Nobody Likes the Clothing Police

I read today about the NJ school that has banned strapless prom dresses and the resultant fall out.

Earlier this month, Sharon Moffat, principal of the Readington Middle School, sent a notice home that read, “Young gentleman are encouraged to wear collared shirts and trousers … young ladies should wear a skirt, dress with straps or a dressy pants outfit.”

And some parents are complaining. 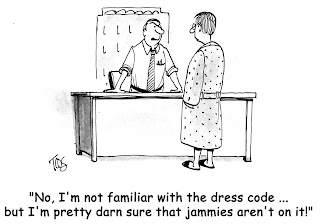 One parent was quoted as saying, “It’s categorizing all these children unfairly. She’s saying the boys don’t know how to handle themselves. This whole issue is sending the kids a bad message: What you wear dictates who you are.”

And I say, geez lady, get serious. Of all the ridiculous things to protest, this should win some type of prize—as though the quality of life for these twelve- and thirteen-year-olds is going to be seriously compromised if they’re denied their “right” to bare arms. (I couldn’t resist. Sorry.)

Additionally, it’s pure hyperbole to state that a dress code “categorizes all children unfairly.” Quit the drama, please. Everyone knows there are good reasons for school dress codes. Has this parent looked at what kids are wearing nowadays? Obviously some rules are needed. And any policy maker knows that most rules are written for the small percent of situations that will warrant them, not for the larger percent that won’t. A policy generally doesn't say anything about all of anyone.

Granted, I’m biased. I’ve had to create and enforce dress codes in my day. When ABC news reported that Moffat was unavailable for comment, I thought to myself, “I know damn well she is. Poor thing.” Nobody appreciates the clothing police, but then people (mostly female people, and again, I’m sorry) want to wear tight, short skirts and tee shirts and flip-flops, so what the heck is to be done?

It was summer, and gradually I’d noticed that some women at work were starting to dress in violation of the code. By far the biggest problem had to do with tank tops. Apparently, some women just can't resist tank tops.

Now, I don’t care if you want to come to work in a freakin tutu, because I’m good at focusing on the task at hand. You won’t distract me for very long, I don’t give a darn what you’re wearing. But crap, my job was to enforce policy, and the managers didn’t want to handle it. So, here comes my boss, insisting that I tow the line.

So I sit a young woman down, a repeat offender, and patiently explain that the company dress code prohibits the wearing of tank tops, unless covered by a jacket or sweater.

And what does she do? Does she say, “My apologies, it won’t happen again?” No. She argues with me about what a tank top is. She insists she's wearing a sleeveless shirt not a tank top.

It’s not my job to call her a liar, right? My job is to take her at face value. So, I explain that no, she’s wearing a tank top, as distinguished by its cut and its stretchy, clingy fabric, thinking to myself “Am I going to have to start posting pictures now?”

And apparently the answer is yes, because then the young lady wants to tell me that she doesn’t understand the difference between a tank top, a sleeveless blouse, and a sleeveless shirt. And while I’m wondering how in hell I got myself in this mess, she says “I mean, no one in my generation wears blouses,” implying that “Hey, old hags like you might know what a blouse is, but I'm a trendy young thang.” Excuse me?

You know that I'm no fan of the b-word, but oh yes, I sat there and thought, “You little …” Besides which, I’ll have you know, I like fashion. I read fashion magazines all the time. And just that day, the new issue of Marie Claire had hit the stands and inside was an entire spread on new spring blouses (yes, the word “blouses” was used).