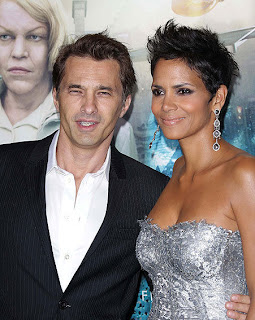 I saw the news report the other day that Halle Berry is pregnant, which I didn’t think much of until I remembered, “Hey, she’s my age!” Which is forty-six.

Of course, Berry looks ten years younger, and that’s perhaps another reason her pregnancy didn’t immediately strike me as odd. Then again, when sixty-one-year-olds are giving birth, anything goes.

Nevertheless, the “Comments” section of the various news reports is filled with criticism for Berry for having a baby at such an advanced maternal age—that’s what the doctors call it; I'm not judging—as well as predictions of the nasty custody battles to ensue once the baby is born. (Again, I’m just the messenger here.)

Well, I’ll confess that I’m a little baffled at a woman nearing fifty wanting to have a baby, but then I started having children when I was twenty-two and had my third when I was at the “advanced maternal age” of thirty-eight. In other words, I have never had any trouble getting pregnant. On the contrary. But that’s a post for another day.

What all of this really brings to my mind is the idea that old is not really old anymore. You know, the whole “forty is the new thirty” mantra.

Okay, Berry is in much better shape than I am, but I remember the difference in having a baby at age twenty-two versus age thirty-eight.  At age twenty-two I gave birth and two days later more or less hopped out of the hospital bed and went on about my business. At age thirty-eight I was still walking with a limp six weeks later.

So, I don’t know about this whole “forty is the new thirty, fifty is the new forty” business. At some point, everybody is just old. (Except for Dana Delany, who actually looks young enough to be dating Luke Perry, although there’s a eleven-year age difference between them. If you aren’t a fan of Body of Proof and don’t know what I’m talking about it, I’m sorry.)

My point is, no one wants to get old, and when you look at celebrities, you could almost believe you don’t have to. Almost.
Posted by Unknown at 10:29 PM