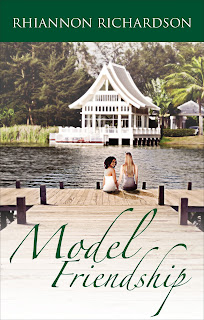 Teen author Rhiannon Richardson is feeling pretty good. Earlier this year she won a bet (big brother Thomas lost) and had a dream come true when her first novel, Model Friendship, was published.

Since then, Rhiannon has been promoting her book—which introduces us to tween and Mail Burry Junior High School student Jackie—all over the place (one benefit of having a marketing whiz for a mom) while completing her own high school projects.

Despite her busy schedule, however, the young author took a few moments to answer a few questions for us. (No spoilers here!)

Why did you write this book?
I spend my summers at my grandparents’ house. They don’t have cable TV, computers, or wifi. On one of those summer days, it was too hot and I didn’t want to go outside, and I had a sketchbook with me, but I wasn’t feeling inspired to draw. So I began writing a story in my sketchbook instead. As I began writing, a story started to come alive for me. That story became Model Friendship.

How long did it take you to finish writing Model Friendship?
I wrote the book by hand in 150 hours. I let a few of my close friends read it so I could get their opinions, and sometimes I made changes based on their feedback. Also, I eventually showed a chapter to my English teacher who encouraged me. I spent a year editing the manuscript before I started looking for a publisher.

Why do you write?
I like to express my thoughts through writing. I like to use my imagination to develop characters and plots. I’m very imaginative so it comes easy to me. Writing is also a nice free-time activity. I write every day.

Are any of the characters based on your friends?
Yes, some aspects of my characters are based on my friends.  Jackie’s best friend, Peyton, and my best friend are alike in some ways.

Jackie is a precocious teen. Was that a deliberate choice or an aspect of her personality that developed as you were writing?
The decision to make Jackie exceptionally smart was deliberate because I wanted my protagonist to be different from the other characters.

Although Jackie is a black girl living among white people, the story has very little to say about race relations, and for the first fifty-nine pages of the book, the reader isn’t even sure about Jackie’s ethnicity. Could you please talk about that?
I grew up in a predominantly white community. Most of my friends are white, and that doesn’t bother me. I’ve replicated that environment in Model Friendship. Race relations are not an issue in my friendships. I don’t stress it in my book because it’s insignificant to the main storyline, as it is insignificant to my life.

Who do you hope will read this book?
I hope everyone will read this book. I believe it can be enjoyed by people of all ages who are looking to read about a special girl learning an important life moral. However, the story is mainly for junior high girls.

In the story, you touch a bit on Jackie’s feelings of parental abandonment but ultimately decide not to discuss them further. Why not?
I chose not to delve into Jackie’s father/daughter relationship issues because it strays away from the main plot. I wanted to focus on Jackie’s friendships and the lessons she learned (one being to accept herself for who she is and not change herself to please others).

How much research did you have to do for this book? For example, you write detailed information about the Hebrew religion, bowling, football, and Disney World. Have you ever been to Disney World?
I researched the Bat Mitzvah, which is the Jewish girl’s coming-of-age ceremony. I attended my best friend’s Bat Mitzvah when she turned thirteen, and I asked her to explain it to me. Bowling, ice skating, etc. are are all activities I enjoy.


Luckily I’ve been to Disney World twice. It’s been years since my last visit, but I still have some great memories. I took some liberties, though, such as the Ball that took place at the Crystal Palace. I don’t think they do that there.

The teen dating world you describe is completely foreign to me. I don’t remember dating being like this when I was a kid, with opulent dinners, lavish parties, limo rides, and so on. Do you consider this a realistic portrayal or more of a dramatic convention to move the story along?
I admit that some of it is dramatic (for example, the Hummer limo rides and fancy dinner). Those parts are purely from my imagination.

Why do you think Jackie was susceptible to being manipulated by Jake?
Jackie was overwhelmed that one of the popular kids was paying attention to her and seemed to really like her. Her mind was clouded by the crush she had on Jake, and she didn’t carefully evaluate the situation to make smart choices.

What do you want your readers to learn from this story?
I want my readers to learn not to cheat in school, that true friends will accept you for who you are, and that you don’t have to change for people to like you.

How much of Jackie is in you?
There are parts of Jackie that are like me. For example, she likes writing and is artistic.

When did twelve-year-olds begin going out for coffee? (Smile)
Some of my friends started going out for coffee when their mothers took them on their coffee runs. Later, they'd go on their own coffee runs with friends. I’ve been out with my mother to Starbuck’s. I even had a taste to satisfy my curiosity. However, I stick to drinking tea. (Laughs)

Model Friendship is available for purchase on amazon.com, barnesandnoble.com, and tatepublishing.com. Check out a brief YouTube video here!

Meet Rhiannon on April 28th from 2-3 at Maine Star Coffee, May 4th from 10AM-PM during the Rosemont College Book Festival, and on May 18th (time TBD) at the Color Book Gallery.