This weekend I learned that there are quite a few things going on in my neighborhood that I knew nothing about.

For example, yesterday I found Wired Beans, a coffee shop, complete with lounge area and wireless access, just a few blocks from my house. I swear I’ve never laid eyes on this shop before. But when I asked the owner how long he’d been here, he said “A little over a year.” What?! I bought a delicious tall cup of chai latte tea for a little over three bucks, which is a little less than what Starbucks charges, so I was happy.

And then today I stopped by the artists' cooperative where Mindy lives to check out the open house hosted by Greene Street Artists, and Bill (that’s nationally recognized artist William Teodecki to you) told me about iMPeRFeCT art gallery, which is right up the street.

Bill is one of the artists I chatted with today, along with Ife Nii Owoo (who is from the states but married a Ghanaese), Brian DeFrees, and Barbara Bullock. I encourage you to click on the hyperlinks, as I’m not an artist (or even well learned in the arts) and am incapable of describing these works as they deserve. Hopefully, my photos will help some.

I visited Bill first and was immediately drawn to a large, colorful, and arresting portrait of his son as a young boy. We started talking about kids, and Bill told me a little about his daughters and his son’s great new job, and at one point he said “I don’t know why I’m talking about this,” and I wanted to tell him, “I just have that way Bill, don’t worry about it,” but instead I simply smiled. Bill was an illustrator back in the day, ‘cause he wanted the Benjamins and wasn’t willing to starve for his art, but since entering semi-retirement a little more than a decade ago he’s been drawing more for artistic expression. I was completely taken with the versatility of his art. I saw portraits and street scenes and mock collages with the most intricate detail you can imagine, among other things.

(I also saw that an old shelf I’d left for the trash years ago is now hanging on Bill’s wall. We both got a chuckle out of that.)

After saying goodbye to Bill I talked to Ife a bit about “40 Acres,” one of her mixed-media collages that caught my eye, and I learned that she’ll be closing an exhibit this week at the MKA Institute Gallery (another gallery I’ve never noticed before, practically around the corner).

After that I walked upstairs into Brian’s ceramic studio (kiln in corner!), which must capture some of the most beautiful light in Germantown. Brian just moved into the studio a little over a year ago, but he’s lived in Philadelphia for 40 years. All of his pots are attractive yet functional. I bought a jewelry box, which is one of the few pieces he makes that isn’t food safe. In addition to pots, Brian makes garden sculpture and highly detailed finials, one of which was attached to his stair post and had me drooling. Gorgeous. 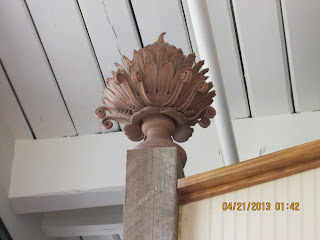 (By this way, this is why I don’t go to art galleries very often and museums hardly ever. I just want to own everything. If I can’t bring it home I don’t even want to see it.)

After Brian told me he’d installed the floor to ceiling shelves in his space, I asked about the paint color, which I really liked, and he said “Taupe … brown gray. I call it grayish brown.” Then he went on to tell me that I had to check out Barbara’s place next door, because while he “live[s] in black and white” Barbara lives in wild color, and I needed to see the difference. 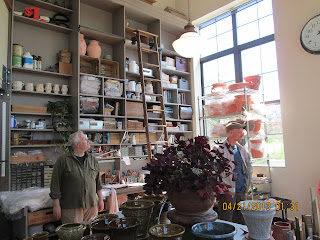 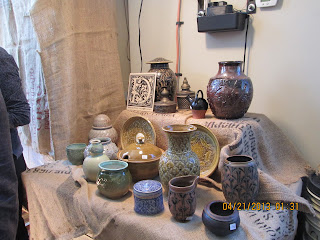 So I headed to Barbara’s next, and of course, Brian was right. Wow. Check out the photos below. I mean, dang.

One of Barbara’s cats had escaped from her studio, and there was no chance of me getting her attention until that was settled, so I was relieved when Brian walked in with naughty Cush. Then I listened while Barbara talked to a couple about her latest gallery exhibit and how she’s avoided galleries for a bit because of the pressure to produce several pieces within a definite timeline, something I can completely understand. (No content farm, I will not be producing six 500-word articles per day to satisfy some greedy and soul-less algorithm.)

But then my time came, and I got to ask Barbara whether one of the large pieces propped against the wall was for sale, and she said yes. Then I braced myself for the price, which was actually exactly what I expected—unfortunately. I asked Barbara if I could take a picture instead. (I also was thinking of asking whether she accepts lay-a-away, but I didn’t want to sound completely tacky.) Barbara also creates these huge fantastical three-dimensional pieces that I overheard two teachers from The Barnes Foundation say would be just fabulous in the museum. I haven’t been to the Barnes art museum (see earlier), but I’m sure these women are spot on.
Eventually I had to go home. After hearing about my adventures, both Ed and Thomas were upset because they hadn’t been invited (actually, they had been). Ed complained that he missed out on the grub, and Thomas, the artist, complained that he missed out on the art. Honestly, these two know how to bring a girl down, quick.

But, now that I’m aware of at least two great galleries within walking distance from our home, I’m sure I can make it up to Thomas. Ed, however, will have to get his own grub.
Posted by Unknown at 8:40 PM