Portrait of an Art Lady 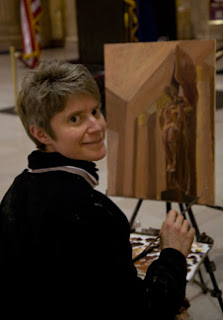 At first blush, Mindy Flexer appears to be your stereotypical artist “type.” A little flaky, often a bit distracted, mellow in temperament, and seemingly unconcerned about money (“Um, how much for a birthday party? I can’t remember exactly—but it’s all on my website…”) she fits the bill—or so it seems.

But not so fast. Mindy is nobody’s stereotype and no ordinary artist. Mindy is “World Famous on Greene Street,” or so she wryly proclaims. She’s also a gifted teacher, successful businesswoman, involved community member, and unabashed activist. Merging her beliefs in the possibility of a more humane world—one in which stronger members aren’t “given permission to be exploitative”—with her many talents, she orders her life determined to make a positive impact in her corner of the universe.

In addition to holding afterschool and Saturday art classes for children and morning and evening classes for adults at the loft studio in Germantown she shares with husband David (an IT policy analyst by day and editor and learner of Japanese by night), Mindy teaches part-time at The Bridge Way School, a safe and supportive academic haven for teens in recovery from substance abuse.

Mindy is a self-described “crunchy-granola girl” from Colorado who migrated to Philadelphia in the eighties to attend The University of the Arts, where she received her BFA in ceramics. (Mindy also holds a BFA in Music from Oberlin and an MEd from the Tyler School of Art.)

Always an artist, as a young girl Mindy played the clarinet, made pottery, and created sculpture, mostly animals, from popsicle sticks, rocks, wooden shapes, clay, and whatever else she could get her hands on. She was and continues to be fascinated with the idea of “making stuff from other stuff.”

Mindy’s journey from young artist to thriving entrepreneur was not without its bumps in the road, however. After graduating from Oberlin, Mindy accepted a Watson Fellowship and studied pottery-making in Japan. Impressed with the culture and the “integrated” lifestyle of the Japanese potters, Mindy returned home determined to replicate their example. After renting a studio space in Northern Liberties, she hung her shingle and declared herself “open for business.”

But it was hard to make a living selling pots. Mindy’s vision was to create everyday pieces that were unique but still useful—neither the super high-end pieces that are more sculptural than functional nor the more-ordinary pieces that can be created relatively quickly and sold cheaply. Somewhere in between these two extremes was a sweet spot that was eluding Mindy. Also, barely in her thirties, her arms, hands, and wrists were already starting to protest their labors.

So, five years into the venture, she sat down with a family friend, a “financial guy,” as Mindy calls him, who patiently helped her calculate how many pieces she’d need to make and sell to pay her bills. That number, it would turn out, was near impossible to attain. As reality dawned, Mindy remembers feeling “lost and crushed.”

“I told him I didn’t know how to do anything else.” She recounted with a tiny tinge of sadness.

Happily, she was wrong about that. She’d taught off and on for years, and it occurred to her that she really liked it. Why not pursue teaching as a full-time career?

That was almost twenty years ago. Sitting and talking with Mindy now while sipping tea from a handmade mug she crafted during her pottery studio days, her natural teaching ability shines through. She’s a great listener, a thoughtful speaker, and a dispenser of equal parts adult wisdom and child-like wonder. And speaking of children, it’s obvious that Mindy appreciates their viewpoint. Children are never “spoken down to” in Mindy’s studio. Instead they are coached, encouraged, and respected as budding fellow artists.


But if all that sounds a little too laid back and “crunchy-granola,” never fear. Mindy knows how to control a classroom. Classes start on time, end on time, and stay on target, yet each student gets the attention he needs to advance his craft.

Mindy says that she’s learned that the “factory model of education doesn’t work,” and she doesn’t care to teach that way.

She’s taught at both Greene Street Friends School and the Charter School of Architecture and Design (CHAD), but each time  came to realize that the back-to-back, forty-five minute classes didn’t afford her enough time for meaningful interaction with the students.

Which is not to say that she regrets either experience. On the contrary, she’s grateful, and now counts many of the wonderful people she met as good friends. Eventually, however, she decided to open her studio for classes and teach her way.

Since then, she’s settled into a life that feels right. She has a steady income from teaching, time to paint, and a new husband. (I asked where they met. “On the evil Internet,” she told me.)

But Mindy’s not finished yet. She’s finally at the place where she’s ready and eager to share her own art with the world again, although this time her art is paintings, not pottery. Mindy says, “I realized that I was making pottery with all kind of colors and that I making pots just to paint on them. So I decided to study painting at PAFA [Pennsylvania Academy of Fine Arts].”

And if that sounds familiar, it is. In fact, experimentation, or “doing what you do until you figure out what works” is a signature theme for Mindy. Says Mindy, “Making art is great practice for life… like life, you don’t really know at the beginning [of the art project] what the end will look like.”

And Mindy thinks this is a great lesson for kids. “Art teaches children to take risks. To be flexible in their thinking. To make decisions with incomplete information, to be courageous. Art teaches kids how to work hard and practice. To chase ideas and be who you are. To keep going and observing and figuring out things as [you] go along. The process of creating art is the same process for building a life.”

Mindy’s response is a clear testament to her love of art and her optimism. I asked how she maintained that optimism throughout the more challenging times in her career.

“Well, I had supportive parents, and as the younger child, I felt allowed to not know what to do. I never felt like I had to have it all together. And I ask for help when I need it.” She paused. “You just have to be committed to keep trying out stuff, and if you do, something will happen.”

Younger child? “Oh yes, I have a Bossy Big Sister,” Mindy tells me, and I can hear the capital letters. Older sister Kaila is a violinist in California who also teaches and performs.

When questioned about the challenges of running her own business, Mindy said that the biggest is “having the discipline to do the parts of the job that aren’t fun.” But she adds that she’s lucky—one of her adult students does the books in exchange for classes. “Delegating and balancing marketing with the ‘doing’ part of the business is hard, too.”

But back to that title—“World Famous on Greene Street.”

“What does it mean?” I asked Mindy.

She told me, “A good friend once said to me that there are two kinds of storytellers. Those who go out into the world and bring stories back to the village, and those who stay in the village and collect stories from the villagers. I’m the storyteller who stays in the village. People know who I am. I’ve got twenty years of relationships here, and I’m hoping for another twenty.” She paused. “No …  more like thirty or forty. But I don’t want to be greedy.”

Mindy's art studio is open for classes and special events six days a week. Greene Street Artists Earth Day , which includes an OPEN STUDIO TOUR and a FREE BOOK-MANIA WORKSHOP will be celebrated on Sunday April 21, 2013 from 12-4 PM.