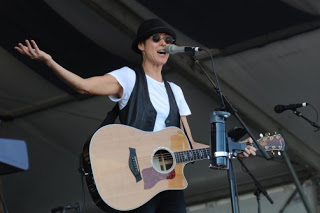 This afternoon I listened to the audiotape of Michelle Shocked at the Yoshi club in San Francisco. All tortuous twenty-two minutes and fifty-nine seconds of it—twice—because I’d read the news reports that she’d gone on an “anti-homosexual rant” during a show, stating that “God hates fags,” and yet later claimed she’d said no such thing, saying "I do not, nor have I ever, said or believed that God hates homosexuals (or anyone else). I said that some of His followers believe that."

And I wanted to know two things.

Number 1—Exactly how does one go from singing songs to “ranting” about homosexuals and offering an opinion of whether God does or doesn’t love them? And Number 2—exactly how does someone else “misinterpret” such a rant?

So I listened, and while I would not call this a rant, yeah, Michelle, you absolutely said those things. Your voice is clear as a bell. Come on.

And the whole dang thing is very, very bizarre.

I don’t know where Shocked goes to church, I don’t know under whom she studied the bible, and I certainly don't know the full basis of her theology. But it does seem to me that as Shocked began to speak to her audience she already had something of an agenda in mind. Why she had that agenda and what she thought would come of her public revelation is anyone’s guess. But if I take her at her word (at the time of the recording, not afterwards when, I’m sorry, she’s clearly lying), then all I have to say is—

This is what happens when evangelism goes really, really wrong.

This is what happens when someone goes off all half cocked, spouting ill-formed thoughts, being loosey goosey with Jesus’ name without (by all appearances) a good grounding in scripture, and, to add insult to injury, without considering that there really is a time and a place for everything.

Now, please don’t get me wrong. I’m not condoning much of Shocked’s speech (or whatever you want to call it) other than her statement that “I love me some Jesus.”

But what I’m saying, or rather asking, is this: Giving Shocked the benefit of the doubt, and assuming that she really does “love her some Jesus” what can Christians learn from this debacle?

I think that what we can learn is this—

If we’re going to go around telling people what’s what from the Word of God, we need to exercise wisdom. We need to exercise good judgment. We need to know the bible. And we need to be prepared for the consequences. Cause let’s face it, Shocked could have done everything right and still faced hostility. That's what the Word does. It separates people.

But at least then, she’d have known that people were rejecting the Word, not her clumsy and inaccurate interpretation of it.

Even so, and again, assuming that Shocked is the born-again Christian she says she is, God can certainly forgive her mistake. And I pray that he does.