Seriously, Where Are the Jobs? 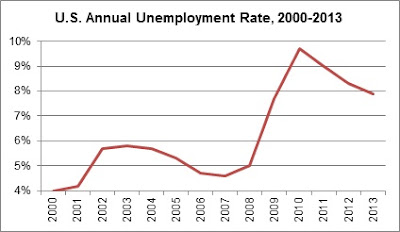 Danielle Belton of blacksnob.com wrote a piece this week called "Everyone I Know Is Unemployed," in which she discusses the sluggish job market and the fact that, yeah, most everyone she knows is unemployed, “cobbling” together a living with various freelance gigs.

What was surprising, if not downright shocking, about this admission is that Belton is a well-regarded blogger and writer with a respectable following. She’s been on television and radio and even had a stint as a writer for the TJ Holmes Show, and she’s saying she can’t get a full-time j-o-b with bennies? Dang.

Commenters on the blog thanked Belton. Many wrote about being unemployed or underemployed and then hearing about a “recovering” economy and thinking they must be crazy or complete losers.

Their stories certainly fit with my experiences. Several people in my circle are in the same boat, including me. I’ve got my clients and my prospects, but it’s not easy by a long shot.

And then I hear about the friend of a friend who just started work a few months ago and is now facing a layoff, the colleague whose entire program has gone belly up (no more federal funding—stick a fork in it, it’s over), the colleague whose organization was restructured and his position eliminated, and so on and so forth. This in addition to my "traditionally" employed friends stuck in crappy jobs they’d leave in a second if they could find anything to replace them.

And then I read about people standing in line to pay $40 for a donut, and I seriously begin to question whether we’re all living in some modern-day version of The Matrix, seeing the reality being peddled by The Powers That Be versus our actual reality, which kind of sucks, but most of us aren’t trying to hear that. We’d rather pay $40 for a donut and pretend it’s all good.

Meanwhile, there’s all this talk about the skills gap, the labor shortage, how employers can’t fill positions, blah, blah, blah, and I just want to know one thing—

Seriously, where are the jobs?