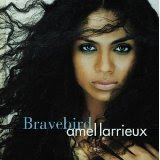 Ever hear a song and wonder, “Why the heck isn’t this artist more popular?” The way you see it, this artist has everything that usually makes for a banging career—looks, charisma, great singing voice, great control of said voice, and then there’s the music itself.

Here are my top five underrated female R&B artists. I don’t know why these vocalists haven’t been given more love, but they’re getting some from me today.

Amerie—Amerie had already released an album when she splashed on the scene big time with “1 Thing,” a song that I understand Jennifer Lopez wanted. The song was included on the Hitch soundtrack, was re-released with Eve, and overall was a huge honking success.  I think that success was more than warranted, because the beats are, as the kids say, off the hook. Every time I hear the song I want to buy a set of drums, and I seriously consider losing half my body weight so that I can slip on a pair of short shorts (watch the video for further explanation). “Gotta Work,” a single that also contains some amazing beats, peaked at #6 on the UK charts, but barely made a stir here. My other all-time favorite Amerie songs are “I Just Died,” “Talkin’ About,” and “More Than Love.”

Lizz Fields—Ms. Fields from Philly, yay! I found her on ITunes one day and have been listening ever since. According to legend, Ms. Fields was recording and producing music during her free time while employed at a furniture store. As the tracks were finished she'd play them at the store, and finally people started asking “Who’s that?” giving her the impetus to pursue her career in earnest. I’m glad she did—her voice is soooo beautiful. It’s smooth and slightly gravely at the same time. Whenever I play her music, I’m reminded of a friend who passed away unexpectedly but not before she and I went to lunch and marveled that we both had discovered and admired this relatively unknown artist. This memory makes me happy. My favorite songs are “Runnin’ on Empty,” “Star Gazer,” Sliding Doors,” and “I’m Waiting.”

Another singer who’s spent some time in Philly is Amel Larrieux, who attended the High School for the Creative and Performing Arts and started out singing with the group Groove Theory. (Their single “Never Enough” is on the Love Jones soundtrack.) Like a lot of artists, Larrieux has switched record labels a few times, even starting her own at one point, but she hasn’t released a studio album since the early 2000s. Until then, I’ll continue to listen to “Bravebird,” “Beyond,” and “No One Else.”

Chanté Moore—Ms. Moore is one of those sultry, sensuous singers that can get away with slightly risque’ stuff because she’s so dang classy. I read that one of her influences is Minnie Ripperton, and that’s entirely easy to believe. I like to think of Moore’s music as “old school” R&B. It consists of solid melodies and decent lyrics supported by Moore’s phenomenal Soprano range. Her music is pretty. If you don’t feel like doing anything special, but you just want to chill while hearing some gorgeous music, check her out. My favorites are “This Time,” “It Ain’t Supposed to Be This Way,” and “First Kiss.”

Maiysha—I'm such a sucker for a pretty face (and now you know—even straight women like to look at pretty women). As I’ve stated multiple times, I don't listen to the radio, so sometimes I’ll purchase a CD on impulse because I like the cover. (Well, I’ll read song titles, too.) But after buying Maiysha’s debut album This Much Is True and being pleasantly surprised by songs like “Chase,” “Hold Me,” and “Alchemy,” I realized—what a minute, I’ve seen her before! And it turns out that Maiysha is a former catalog model of a popular women’s clothing line, and that’s why she looked so familiar. A few years ago she released an album of covers, but I’m waiting for another original album. Hope it comes soon!

What all these women have in common is that each can actually sing (yes, even Amerie).

Do you have a favorite underrated artist? If so, please add him or her to the list!
Posted by Unknown at 8:03 PM